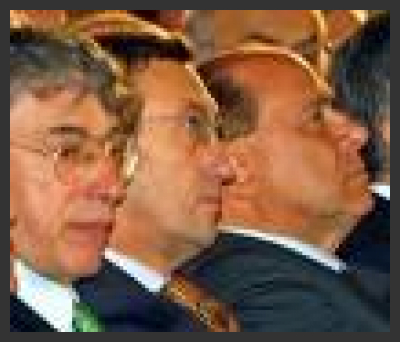 Italian Government is living the umpteenth scandal, it came out that a man called Anemone bought the coliseum facing house to the former italian Minister of Economic Development, Claudio Scajola; more than 400 powerful men are involved, many of them are from Berlusconi’s party . Twenty years ago Italy faced Tangentopoli, the effect was a big hearth wake on Italian politics; the old “kings” were forced to disappear, it was when Italians buried forever the political party ideologies, It was when Berlusconi decided to come into politics selling himself as the Deus ex Machina of italian politics decadence. The last 20 years where performed by an anchorman with the taste for Neapolitan music, pretty girls and dirty jokes. Mister B transferred his own television style and staff into Parliament and Senate. Even though he is affected by many scandals, the majority of Italians still think that he is a good Prime Minister. Conflict of interest resounds now as something obsolete because Italians have arbitrarily decided to support a man that is working hard for his own statement. In all the rest of the so called democracy when a scandal affects politicians, they are forced to publicly apologize and resign, instead to mister B, that is collecting scandals since the beginning, they make his power stronger. Since 1994 the opposition has holed up, ironically who is rowing opposite to the Prime Minister’s political plans is Gianfranco Fini, the PDL co-founding father. While Fini is living his inner ideological crisis, Umberto Bossi, Leader of the xenophobic coalition party Lega Nord, is pushing Berlusconi to leave him more political control. The frame is quite funny, on one side we have the new-left oriented Fini and on the other one the racist Bossi, the problem is that Berlusconi tips the balance. The last scandal has been called as a new Tangentopoli, but Berlusconi Government is far to collapse.